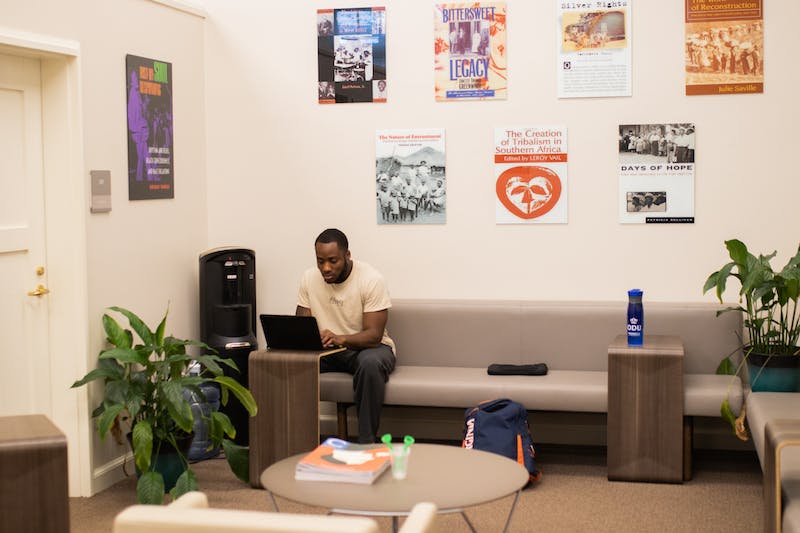 Every year since 1981, the Carter G. Woodson Institute for African American and African Studies hosted a group of predoctoral and postdoctoral fellows in the institute’s residential fellow program. This fall, seven fellows will move to Charlottesville to begin the two-year program.

The cohort spans demographics and areas of interest, with five women and two men, four pre-doctoral students and three post-doctoral fellows, and individuals from the United States, France, Syria, and the Caribbean. The seven diverse scholars will join a history of more than 200 residential fellowship program participants, including Director Robert Trent Vinson.

This year’s fellows have been chosen from a collection of over 100 applicants and will devote their time to writing manuscripts and theses – postdoctoral students will also teach undergraduate courses. Along with writing and teaching, Scholars regularly hold community conferences to educate students, faculty, and staff about their academic field of study.

Discussing the diversity of the incoming cohort, Vinson said applicants are intentionally chosen by a panel of scholars and alumni to represent a range of diverse disciplines and areas of study in the global black community.

“We’re really trying to find a balance between continuity and change so that the new group can complement the current cohort but also do something different,” Vinson said.

Vinson was an informal fellow at the Woodson Institute in 1998, at a time when there were only two postdoctoral fellows and four predoctoral fellows. When the fellowship program started, according to Vinson, most scholars were historians. Today, Fellows embody a range of disciplines – political science, gender and sexuality, and anthropology are just a sample of the list.

Anna Duensing, a new post-doctoral fellow at the Woodson Institute, earned her doctorate in history and African-American and American studies at Yale University after growing up in Charlottesville. Duensing told the Cavalier Daily how the scholarship program’s opportunity to engage in “fundamentally transformative” work with black studies in a global context was a major draw to the program.

“The interdisciplinary and geographic scope of faculty and fellow work is particularly exciting to me,” Duensing said. “In my own work, I strive to bring an interdisciplinary and transnational approach to the global histories of white supremacy and black resistance, but this work is still ongoing and necessarily collaborative and cross-border.”

Frances Bell, a new scholar and doctoral candidate in the College of William and Mary’s history department, echoed Duensing in choosing Woodson for the exposure he provides to a rich range of topics in the study. of the black diaspora.

“I’m really looking forward to working with scholars from a wider range of disciplines — literary scholars, anthropologists, artists — as well as historians from fields different from mine,” Bell said. “It’s easy to find yourself only talking to people in your own field, but while that’s important, it’s also invaluable to work with and learn from people with different skill sets.”

For many fellows, the strong reputation of the Woodson Institute has prompted them to apply. Abraham Seda, currently a pre-doctoral fellow and doctoral candidate in the Department of History at the University of Minnesota, said he was drawn to the program after reading the work of former Woodson Institute fellows.

“In terms of black studies, the Woodson was an obvious choice,” Seda said. “Many scholars whose work I admire have been fellows at Woodson over the years. I was very interested in being part of this tradition.

Mahaliah Little said the prestige represented by the high placement percentage at the University and among other competitive colleges was compelling but daunting. Since its founding, Woodson has put more than 180 scholars in tenure-track positions and postdoctoral fellowships across the country at universities such as Brown University, Vanderbilt University, and the Massachusetts Institute of Technology.

“When I applied, I knew the acceptance group would be selective, but my hope of joining Woodson’s academic lineage overcame my initial doubts about my chances,” Little said. “I’m so glad I did.”

Many incoming and current scholars have highlighted the value of the series of bi-weekly workshops, in which fellows invite a guest speaker who joins the cohort to provide feedback on their thesis or manuscript. In each workshop, a fellow shares a chapter of their work and the group engages in a guest-led discussion seminar. Current postdoctoral fellow Little has found the workshops particularly valuable to her work.

“It was electric,” Little said, describing his workshop. “I enjoyed receiving feedback on my writing in a low-stakes, supportive environment.”

Vinson emphasized the importance of ongoing collaboration between scholars and staff at the Woodson Institute, a task facilitated by staff members who attend both the workshops and the regular community talks given by Woodson Fellows.

“It’s not like we just give them office space and never engage with them, but they appreciate the way we take care of them,” Vinson said. “We see them as human beings who are important and who need to be supported.

Along with writing and editing manuscripts, a key part of postdoctoral fellows’ role in the program is to expand their teaching portfolio by offering courses in the University’s Department of African Studies. Vinson believes that Fellows are experts, contributing new knowledge in a way that directly benefits the academic community. By offering new courses to undergraduate students, Scholars expand academic programs while contributing to ongoing research.

“I look forward to continuing to discover and learn new things and to build a deeply humane, ethical and intellectual community,” Vinson said.

Collaborating with fellow scholars and engaging in teaching and research ultimately adds to the value that the Woodson Institute provides to these scholars and helps make their field of study more meaningful. For many fellows, the research is already meaningful and personal – like for Seda, whose work focuses on how Africans created beautiful lives despite the violence they faced under colonial rule.

“As an African scholar who writes about Africa, I derive great satisfaction from writing about the communities that have been influential in shaping who I am as a person,” Seda said.

A new pre-doctoral fellow, Kelsey Moore, plans to use her research on the Santee-Cooper Project and 20th-century black southern history to challenge and shape current perceptions of black southerners. She hopes that through her work at Woodson, she can “expand the way historians and beyond think about African-American history more broadly.”

Fellows are all excited about the work they will be doing over the next two years on Grounds – especially Duensing. Growing up in Charlottesville and now blessed with a background of education and activism around Grounds, she expects to return to college as a historian in a few months.

“The idea of ​​starting my career by returning to this community, the opportunity to teach, write and converse amidst this complex landscape of political and public history was really appealing,” Duensing said.

Regardless of their major area of ​​study, all incoming scholars will contribute to the flourishing study of African American and African history that the Woodson Institute fosters – a study of both history and the present of which all members of the university community will ultimately benefit.