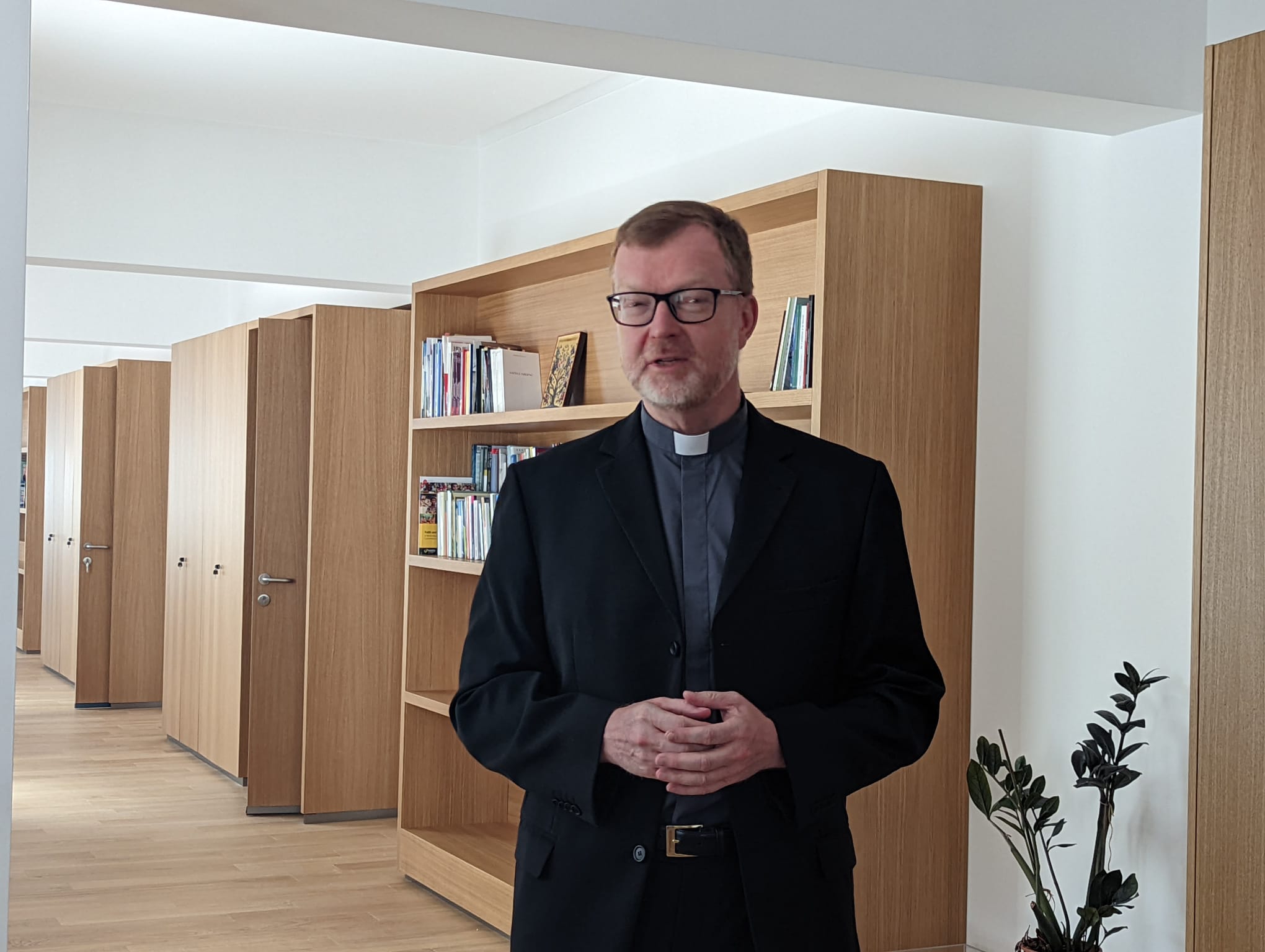 ROME – One of the main anti-abuse institutions of the Catholic Church, part of the Pontifical Gregorian University in Rome, announced last October its intention to expand its mandate to include adult sexual and spiritual abuse.

As of this week, the flagship institute has new offices on the fourth floor of Rome’s Villa Malta, famous for being the home of the Jesuit magazine Civilta Cattolica.

German Jesuit Father Hans Zollner, one of Pope Francis’ top advisers on abuse, hosted a handful of journalists, including Node – at the new headquarters of what is now the Institute of Anthropology, Interdisciplinary Studies in Human Dignity and Care, or IADC, to talk about both the mission and the vision of what will become the agency the Church’s benchmark for preventing abuse.

“Our task is academic,” Zollner said. “We need to make sure we understand what has caused the abuse crisis in the church and beyond, and what were the conditions that led to it being dealt with in neglect and concealment.”

The Institute is the evolution of the Child Protection Center, founded by Zollner with the support of German Cardinal Reinhard Marx. But being a center completely dependent on the Pontifical Gregorian University posed two main problems: there was no faculty and no means of awarding degrees. However, the Institute will be able not only to grant doctorates, but also to welcome post-docs for research on the question of safeguarding. Three of these researchers will join the permanent team next semester.

The idea to expand the scope of the study came after a 2018 Pennsylvania grand jury report revealed how a series of bishops in that state routinely covered up abusive priests. Subsequent investigative reports of clergy abuse, including in Zollner’s native Germany and more recently in France, have identified the same systemic and structural problems.

But if things go as planned, the Institute will provide the academic and scientific ammunition for decision-makers to act.

“We want to focus on fundamental issues,” Zollner said. “For example, surprisingly after 40 years of public debate and public scandal in the media, we still don’t know what works in safeguards, scientifically speaking. Nobody can tell you exactly what is really useful and what drives down the number of new allegations in an institution. What works? Is it the instructions, the pedagogical rhythm, the media tension?

“There is a spiritual wound in most of the survivors within the church, because they were believers and many still define themselves as believers. But we have overlooked this spiritual wound and it is a great scandal to me,” he said. “Where are they [victims]with their history of abuse, neglect and resistance from the church when it comes to living with a faith that has been bruised, hurt and sometimes destroyed? »

Within the scientific community, particularly in the English-speaking world, he said, researchers depend on grants. The common thing is for a researcher to get a grant, do their research in a few years, host a conference, and move on. It is this short-sighted attitude that has led to the fact that today no one knows what works when it comes to ensuring that every child is safe – not just in the church, but in sports, the entertainment industry and schools.

“In April, I was in the [United] In the United States, I visited Harvard, the University of Notre Dame, Boston College, Seattle University, Gonzaga, and discovered that there was no sustained effort to do research at this topic,” Zollner said. “And that’s in the United States, where you have the money and they’ve been doing it for 40 years.”

There is no current and consistent structure in place that allows the Catholic hierarchy, wherever located, to address clergy – and bishops in particular – credibly accused of wrongdoing in matters abuse and/or concealment. As Zollner pointed out, “the bishops of Poland have been dismissed, but not the bishops of Germany who are in the same boat.”

Meanwhile, in the classrooms of the Institute, in any semester, about 25 people from around the world will graduate or graduate on safeguarding.

The Institute’s research department will seek to understand where the resistances lie within the system. Zollner said many people seek change because they have seen “the way victims have been silenced, viewed as enemies of the church, unwelcome and denied welcome and simple empathy they needed”.

Applicants to the Institute face a selection process that will attempt to identify those who plan to continue working in the field of conservation, while weeding out those whose behavior and attitudes reveal troubling personalities. Unfortunately, there is no foolproof method when it comes to identifying “strange” attitudes, Zollner said.

Zollner hopes the students will help the church move forward in safeguarding — something individual churches in the United States and most Western European countries have made progress — but also in recognizing its failures. .

To this end, the Institute plans to send the students to carry out their obligatory internships in the episcopal conferences which have requested the help of the organization. Students will see how things are done and help improve processes, not only to protect children today, but also to help bring closure to those who have already been hurt by those called to protect them.

Tribute to Giorgi Eliava and Eliava Institute of Bacteriophage