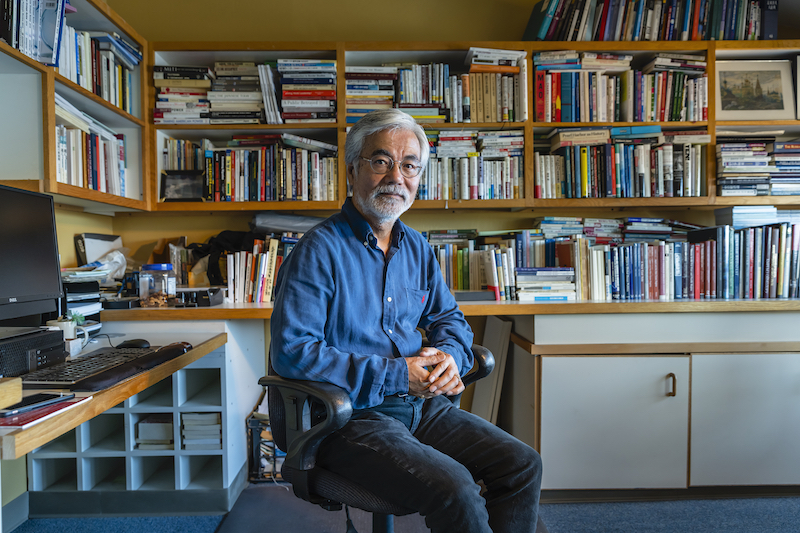 I am writing to share the sad news of the passing of Professor Emeritus Tsuneo Akaha on Wednesday, November 17, after a short illness. As many of you know, Tsuneo and his wife, Janet, moved to Hawaii after retiring from the Institute in June 2020 in order to be closer to their two children, Mitzi and Yoshi. Tsuneo was an engaged and appreciated teacher in the classroom and beyond; he was equally effective in leading students’ academic discoveries in his intensive discussions at seminars as he participated in study tours he helped organize to Japan and Russia. Tsuneo was furthermore an accomplished researcher and well-published author on a multitude of complex and topical subjects, ranging from international relations in North East Asia to the experience of international migrants. His keen intelligence, patient mentorship, low-key humor and generous friendship have been deeply appreciated by all his colleagues and many cohorts of students during his career at MIIS.

Professor Akaha, originally from Japan, came for the first time to we as a secondary exchange student; his cultural immersion included playing American football. After graduating from Waseda University in Tokyo, he returned to the United States to pursue graduate studies at the University of Southern California. TO USC, Tsuneo began his friendship with the late Ray Zilinskas from SNC, then another graduate student, years ago one or the other would come to MIIS. Tsuneo received his doctorate in international relations from USC in 1981. Prior to joining the Institute in September 1989, he taught at the University of Southern California, Kansas State University, and Bowling Green State University (Ohio). TO MIIS, Tsuneo has taught courses focusing on human security, international migration, multiculturalism, East Asia, and Russia-East Asia relations. His insightful and original scholarship in these areas contributed to his ability as a teacher. Tsuneo has written or edited 11 books and has written over 100 journal articles and book chapters; his co-published book, The American-Japanese Alliance: Balancing Soft Power and Hard Power in East Asia, received a special Ohira Memorial Award.

Professor Akaha has received numerous scholarships and awards during his time at the Institute, including a Fulbright-Hays Fellowship for Overseas Research, a Professional Fellowship from the Japan Foundation, and Fellowships from the we Institute of Peace, Association for Asian Studies, Freeman Foundation and Center for Global Partnership. He was President of Asian Studies on the Pacific Coast (ASPAC), a regional branch of the Association for Asian Studies, during which he led the ASPAC conference at the MIIS Campus. During his academic career, he has given guest lectures around the world, including Canada, China, France, Japan, Korea, Kyrgyzstan, Mongolia, Russia, Sweden and Turkey.

Tsuneo’s many extracurricular interests included international travel, photography, reading, and nature treks. He is committed to promoting international cooperation in higher education and has helped the Institute establish exchange programs with Waseda University. He was also an international researcher funded by the Open Society Institute, acting as an academic mentor for young professors in Russia (Saint Petersburg, Perm, Ekaterinburg) and Kyrgyzstan (Bishkek). He served on the International Advisory Board of the School of Regional and International Studies at the Federal University of the Far East in Vladivostok, Russia, and the Mongolian Development Research Center in Ulaanbaatar.

Arrangements for the memorial service are pending, but we will keep you informed as soon as we receive more information. Messages of condolence to the Akaha family can be mailed to this address:

Research at the Wind Energy Institute shows the commitments of France and India: Senator