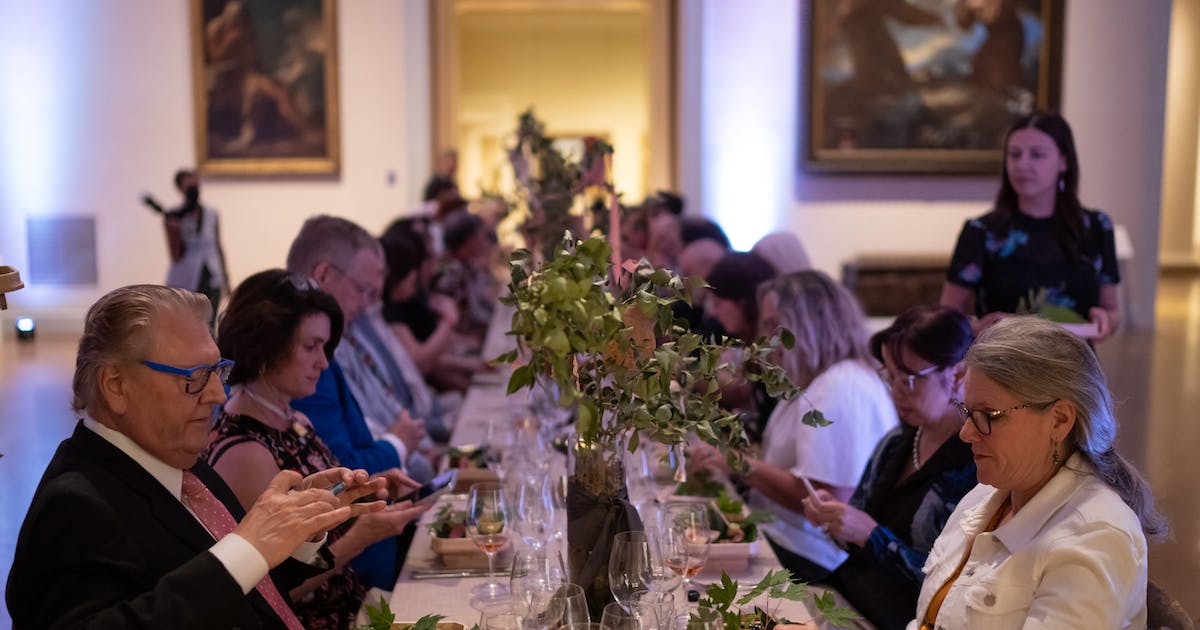 Peggy Grieve scanned the room at a recent dinner party, looking for faces she recognized. There were her dining companions, of course – her son and his fiancee, seated across from her. But just beyond the long, candlelit table, she spotted a man she thought she knew. He wore a blue bodysuit and a red cape. “St. Michael, I think,” the Sunfish Lake resident said.

She turned in her chair and saw another figure behind her, with unmistakable curly locks flowing down her shoulders. “Christ,” she said, “I recognize.

“And there’s Judith,” pointed out Matthew Welch, who was seated next to Grieve at the table, “holding Holofernes’ head.”

This dinner didn’t have a time-traveling guest list, but it did have an extraordinary setting — in a rotunda at the Minneapolis Institute of Art, surrounded by towering European Renaissance oil paintings.

Grieve attended a one-of-a-kind public dinner party at one of Mia’s galleries for a multi-course meal crafted by two top local chefs and inspired by two stunning new exhibits. (Welch, seated next to her, is Mia’s deputy director and chief curator.)

The Kaiseki Art and Dining Experience combines artwork from “Dressed by Nature: Textiles of Japan” and “Van Gogh and the Olive Groves,” special exhibits with seemingly little in common. But after touring the galleries with curators, guests sat down to a meticulous meal by chefs Shigeyuki Furukawa and Jamie Malone who explored the startling intersections between hand-sewn Japanese dresses and heavy brushstrokes depicting the sight of Provence from the window of Van Gogh’s hospital. .

“I always tell people, ‘I work at the intersection of food and art,'” said Furukawa, founder and co-owner of Kaiseki Furukawa restaurant in Minneapolis. “Finally, it became concrete.”

Although the museum has held donor receptions or rented spaces in its classic 1915 building for private parties, this is one of the few times the public can purchase tickets for a meal among the artwork. , said Mia director and president Katie Luber. What’s even more unusual is that the food is inspired by the pieces themselves.

“It’s an experiment,” said Luber, who joined the museum in early 2020. “We wanted to try something we hadn’t seen before.”

Luber arrived just before COVID-19 shut down the museum — and its on-site restaurant. While the museum is almost back to normal, the mezzanine restaurant, Agra Culture, never reopened. (The Agra Culture cafe on the lower level is still in operation.)

“We’re really committed to rebuilding our audience, because in the past we’ve had many, many visitors, and we’re still working to find those people,” she said. Food, she thought, might be one way.

Luber was thinking about how to redo the restaurant into something that offered more of a customer experience. In her previous job at the San Antonio Museum of Art, she had overseen pop-up chef parties and wanted to try that at Mia before reopening the restaurant. She began brainstorming with Malone, the James Beard-appointed chef, on a culinary way to excite guests for the two new exhibits.

Known for her French technique, Malone is increasingly interested in the crossover between French and Japanese cuisine. At the same time, she was reading about Van Gogh and learned that he had a keen interest in Japanese prints. While chatting with Luber, Malone wondered aloud, “What if Van Gogh had gone to Japan?”

“We were like, ‘Omigod, that would be amazing to explore,'” Luber said.

Malone invited Furukawa for the conversation, and they landed on the format of kaiseki, a traditional Japanese dinner inspired by the seasons that tells a story with each dish. Mia’s dinner dishes each came with a scroll that revealed the conceptual framework the chefs used to link art to food and posed a question.

Questions such as: “How was Japanese cuisine different from French cuisine? Van Gogh avoided luxury; would he have been more drawn to Japanese culinary sensibilities?” And “Kissaten was the Japanese equivalent of French cafés at the time. What late-night conversations would artists have had over cigarettes in these spaces?”

Dishes alternated between classic Japanese cuisine and classic French cuisine, and gave a subtle nod to art, especially textiles, many of which were created with natural materials such as fish skin, leaves banana leaves, nettles and persimmon juice.

A Furukawa class included a one-bite, crispy-chip crab that evoked the designs of sea life on a kimono in the textile parlour. Another, a vegetable and seafood jelly soup, was served on a huge leaf reminiscent of Van Gogh’s sunflowers. One of the wine pairings, selected by Bill Summerville, came from the area where Van Gogh was hospitalized.

“It was more like ‘Go find the connection,’ so it wasn’t there in your face,” said Andreas Marks, curator of the Japanese Textiles exhibit. “For me, I thought the classes worked very harmoniously together.”

The dinner series, launched earlier this month, will continue on select Wednesdays until September 7. Luber plans to host another dinner when a Botticelli exhibit opens this fall. Eventually, she hopes to make exhibition-related dinners a regular occurrence at the restaurant, drawing inspiration from Mia’s extensive collection.

Dinners were a logistical challenge for the chefs, serving multiple courses without traditional cuisine. And because there is no permanent infrastructure for restoration, the events have cost the museum dearly. It’s also for guests, at $375 a ticket.

But for those who were able to attend, the delights went beyond the culinary and the artistic. The affair is intimate, limited to 45 guests at a long table. At the first dinner, to Luber’s astonishment, attendees came from as far away as Finland.

There’s also the powerful, almost eerie silence of being in the museum after hours.

“It’s super cool to be able to be in the museum when it’s not open to the public,” Malone said. “I want to be around this work of art, a moment of calm is really powerful.”

Dinners are held in the third-floor rotunda, across from an atrium of one of Van Gogh’s Olive Grove paintings. European oil paintings of biblical figures Grieve had identified hang high on the walls, well out of reach of spills and splashes.

“We didn’t feel like there was really a lot of risk, and everyone was also very respectful and careful,” Luber said.

Luber hopes future dinners will be held at other locations in the museum. One place they won’t be, however, is in the galleries where the textiles are on display, as they are unwrapped and vulnerable.

Even so, Marks was on the edge of his seat during the first dinner.

“I was kind of like, ‘Thank God we’re not in my gallery,'” he said. “It’s surreal to a degree, because we have these strict rules. We’re already saying no food or drink. Red wine? It’s like going nuclear.”

Tickets for “Kaiseki, a history of Van Gogh and Japan in 1880” are available here.

The market for data migration services is booming globally