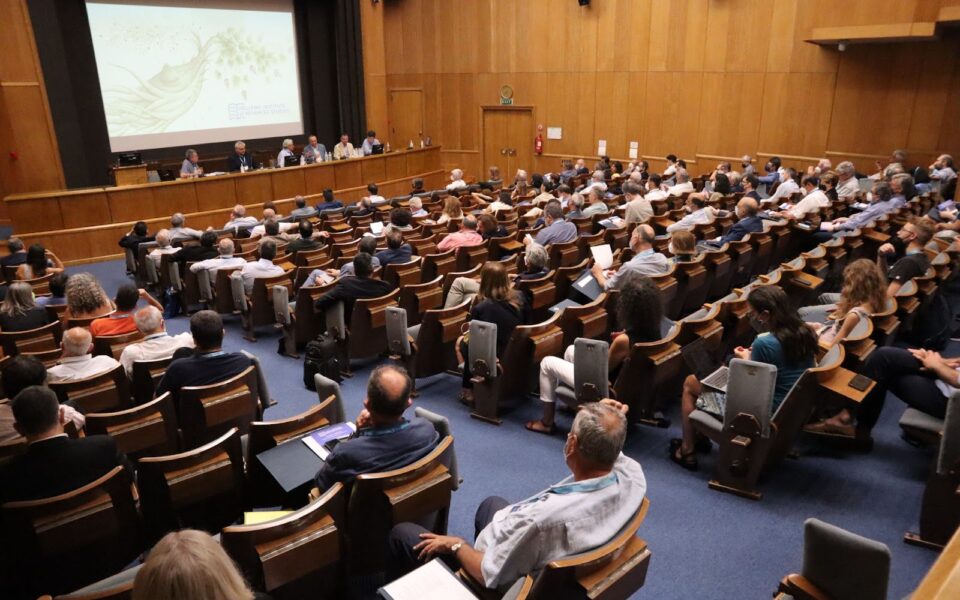 Inaugural Symposium of the Hellenic Institute for Advanced Studies

The Hellenic Institute for Advanced Studies held its inaugural meeting at the Eugenides Foundation in Athens. The audience included several distinguished scientists and engineers from Greece and the Greek Diaspora as well as entrepreneurs, academics and policy makers.

The inaugural symposium was structured around four main themes: Engineering and Science Education, Energy and Climate, Artificial Intelligence and Computing, and Innovation and Entrepreneurship in Greece. A number of lively discussions highlighted societal challenges that could be addressed by science and engineering. Several concrete ideas were presented to strengthen bridges between scholars across Greece and the Greek Diaspora with a focus on younger generations.

The symposium opened on Friday with the presentation of a written statement by the President of the Hellenic Republic, Katerina Sakellaropoulou. The President stressed the importance for Greece to become outward-looking in the field of science and innovation while addressing the issue of brain gain.

The new U.S. Ambassador to Greece, Mr. George Tsunis, also greeted the audience and highlighted the growing science and innovation ties between the United States and Greece, as well as science and technology agreements between the two. country. He also mentioned that recent US companies are setting up successful innovation hubs in Greece.

HIAS President, Petros Koumoutsakos, concluded the opening session by presenting the HIAS initiative and its initial efforts. He presented the strategic goals of HIAS and its efforts to establish a physical home for diaspora scientists in the near future.

In engineering and science education, keynote speaker Dean Yiannis Yortsos (USC) formulated a vision for the development of grand challenges for Greece, similar to the National Academy of Engineering, which can drive reforms in research and education while inspiring students to tackle societally relevant challenges. He also challenged the public to embrace ethical and societal considerations in engineering. During the panel discussion, Pericles Mitkas (Hellenic Authority for Higher Education) highlighted the challenges related to the transition between education and industry, while Mr. Dimitropoulos (Secretary General, Ministry of Education) presented the recent internationalization programs of Greek universities through visiting professor appointments. Professor Chli (ETHZ) asked the community to think about a rebranding of Greece as a destination of choice for research, education and innovation. This could be achieved by providing its diaspora scientists with a more welcoming and nurturing environment in terms of permanent job openings, higher salaries and less teaching load. Provost Sotiropoulo (Virginia Commonwealth University) emphasized the need for project-based education while taking into account societal considerations.

In the Energy and Climate panel, keynote speaker Anna Stephanopoulou (University of Michigan), presented her vision for research on automotive electrification and the challenges of advancing battery technology. She highlighted the fact that Greece has the oldest transport fleet in the EU and suggested the electrification of public transport as an immediate next step. The panel of Michael Caramanis (Boston University), Efi Fofoula-Georgiou (UC Irvine), Alexander MItsos (Aachen) and Athanasios Nenes (EPFL) raised a variety of issues ranging from connecting the Greek islands, l integration of renewable energy, climate adaptation and mitigation that should proactively inform responses to fires, as well as the enormous but unrecognized health impact of smoke due to frequent fires and burning of wood in Greece.

The panel on artificial intelligence and computer science started with Professor Joseph Sifakis (CNRS) who discussed the need to rethink AI in the context of larger systems, in autonomous systems or infrastructure systems paving the way for a symbiosis of modern AI and model-based approaches. . The panel discussed the mechanisms that can lead to collaborations between researchers. Professor Timos Sellis (Archimedes Research Unit) presented the new Archimedes Research Institute whose mission is to fight against brain gain by offering foreign researchers the opportunity to supervise Greek AI graduate students. Professor Maragos (NTUA) presented HERON, a new robotics research institute that was started by a HIAS study for the future of robotics in Greece. Professor Alexandrou (University of Cyprus) defended the field of computer science as an opportunity for interdisciplinary education and research in Greece. She also explained how she started an AI for science program in Cyprus and the role of IT for AI. Professor Kozyrakis (Stanford) discussed new trends in AI hardware towards specialized but targeted architectures that could lead to unique technological opportunities for Greece.

The final panel focused on innovation and began with a greeting from Albert Bourla (CEO, Pfizer), who spoke about Pfizer’s major R&D investments in Greece that have catalyzed broader engagements with academic ecosystems and research. This was followed by a speech by Professor Tavernarakis (U. of Crete, FORTH) who presented various challenges in translating research into innovation both at European and national level. He then described the structure of Horizon Europe 2021-2027, which has specific mechanisms to address these structural issues. Professor Artavanis-Tsakonas (Harvard) stressed the importance of improving the quality of science as a prerequisite for improving innovation. Professor Ioannidis (University of Athens) stressed the importance of educating students about innovation from the start in order to address cultural issues of risk aversion among researchers. Professor Paragios (Paris Saclay and TheraPanacea) presented the case of France as a model for initiating academic startups. Until recently, France had no unicorn startups, but thanks to some specific mechanisms, such as university leave, early start-up funding, and tax and social incentives, the innovation ecosystem has produced more of 30 unicorns in a short time. Vassilis Papakonstantinou (MIT Enterprise Forum) presented ideas on how to improve the networking of innovators around the world.

The symposium was concluded by Andreas Boudouvis (NTUA Rector) who summarized actionable ideas and future actions for HIAS.

The symposium was co-sponsored by the National Technical University of Athens, the Latsis Foundation and the Eugenides Foundation.