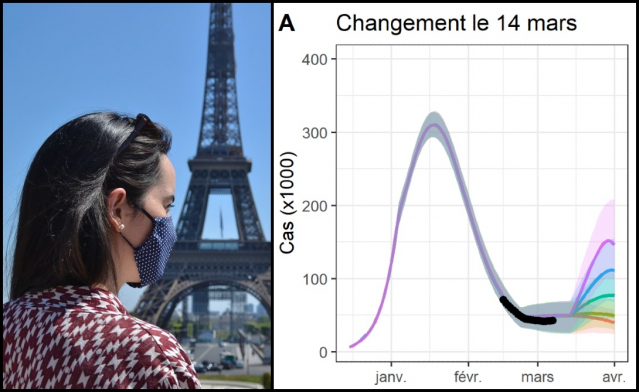 France’s famed Institut Pasteur has mapped out five possible scenarios for how Covid case rates will evolve after new rules were relaxed on Monday, March 14.

In all five cases, the peak will not be as high as it was in January and February, when more than 350,000 cases were reported daily. But in the worst-case scenario, case rates could soar to around 150,000 a day.

The vaccination pass system, requiring everyone over 16 to present proof of being fully vaccinated or cured of Covid to enter most public places, will end on March 14. It will also no longer be necessary from this date to wear a mask in indoor public places. (except in public transport, hospitals and some other places).

Read more: France Covid: doctors call for caution before the relaxation of the rules

It also examines what might happen if the French, anticipating the easing of measures, began to increase their contact with others sooner. To account for this, the report also plots scenarios in which case rates change from March 7.

Simon Cauchemez, one of the report’s authors, said:

“We hypothesized that the French would increase their contact with others on March 1, leading to a plateau of cases in early March.

“The plateau was actually observed a little earlier and is consistent with an increase in contacts on February 22.

“So we explored scenarios where the easing of measures leads to people interacting more with each other from March 7 and 14. In all scenarios, the peak in cases remains well below the January peak.”

In the worst case, shown in purple, transmission rates are 130% higher than they were in January and February. This could lead to around 150,000 new Covid cases every day, according to the Institute’s models.

In the best-case scenario, depicted in red, case rates should stabilize around their current levels, 50,000 per day, before starting to decline in April.

The Institut Pasteur explains that in its modeling it hypothesized that people infected with the Omicron variant would not be re-infected again until April (end of the time scale they were looking at).

This would explain why even though transmission rates are 130% of January and February levels, he predicts fewer cases.

The report explains that these scenarios are based on past trends observed during the pandemic, but are still incomplete and uncertain as the pandemic is difficult to predict accurately.

The scenarios also only look at general case rates, without examining how they might differ between demographics, or hospitalization rates or intensive care unit admissions.

The report gave no indication of how rising case rates would affect hospitalization rates, intensive care admissions or deaths.

The current Covid situation in France

France has an average of 54,372 new cases each day, based on figures for the past seven days. This is 1% more than the previous week, figures from the Covidtracker.fr program.

On average, 126 people die of Covid every day in hospital, 19% less than last week.

“We are currently seeing a rebound in France, in the countries around us, which means that Covid cases are no longer decreasing, but increasing,” he said.

“On the other hand, hospital rates continue to decline, but the pace of decline has started to slow.

He said this development will not impact plans to ease Covid measures on Monday March 14.

Coronavirus: Daily update on the situation in France