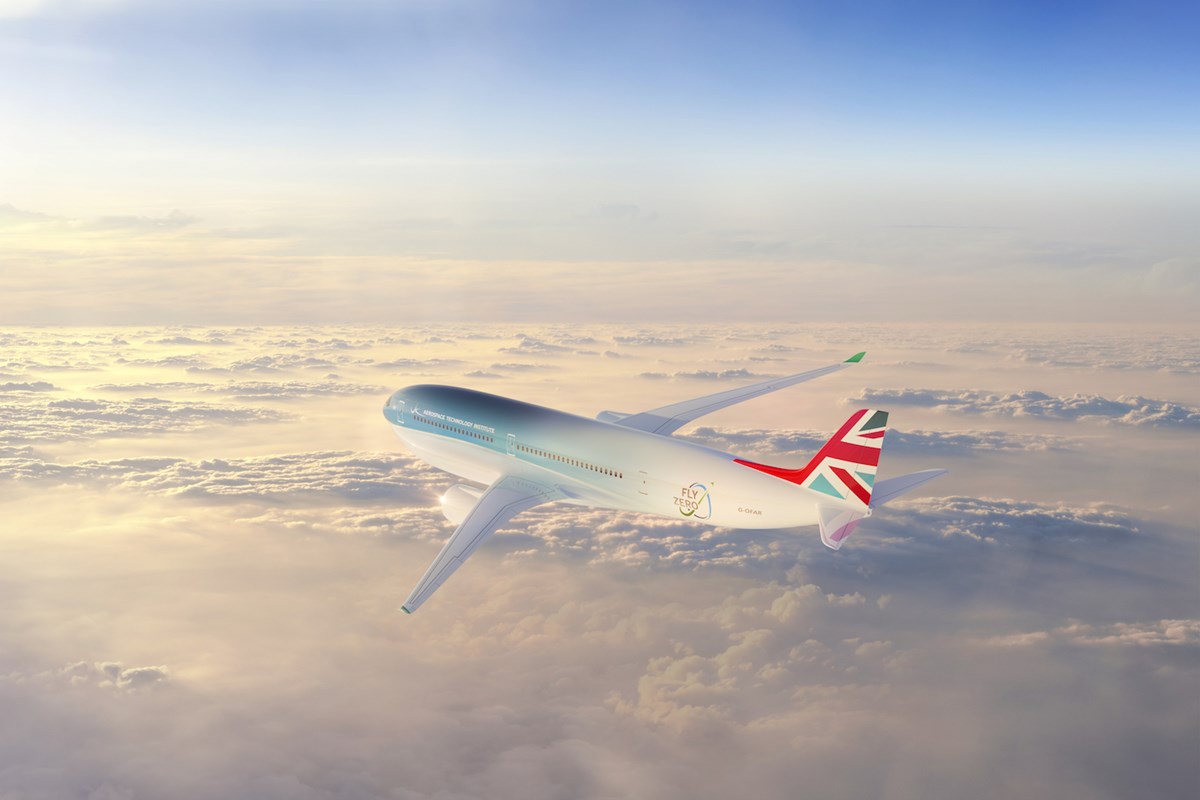 Developed by a team of UK aerospace and aviation experts under the government-backed FlyZero project, a medium and long-range aircraft concept revealed by the Aerospace Technology Institute (ATI, Cranfield, UK) demonstrates the potential of green liquid hydrogen for not just regional air travel or short-haul flight, but for global connectivity. More importantly, the mid-size concept will meet the demands of a market sector between single-aisle and wide-body aircraft operations, which together account for 93% of aviation carbon emissions.

Fueled by liquid hydrogen, the fuel is stored in cryogenic fuel tanks at around -250 ° C at the rear of the fuselage and in two smaller tanks along the front fuselage. These cheek tanks also serve to maintain the aircraft’s balance while the fuel burns and eliminate the need for additional aerodynamic structures. The 54-meter wingspan of the aircraft carries two turbojets powered by the combustion of hydrogen.

“In an age when the world is focused on tackling climate change, our mid-size concept sets out a truly revolutionary vision for the future of global air travel by keeping families, businesses and nations connected carbon-free” said Chris Gear, director of the FlyZero project. “This new era for aviation brings real opportunities for the UK aerospace sector to secure market share, highly skilled jobs and foreign investment while helping to deliver on UK commitments to tackle climate change.”

Liquid hydrogen is a light fuel, which has three times the energy of kerosene and sixty times the energy of batteries per kilogram and emits no CO2 when burnt. While there are still technological challenges for liquid hydrogen flight, the switch to hydrogen power continues to develop an incentive for its achievement. According to ATI, a new generation of highly efficient, low-fuel hydrogen aircraft is expected to have higher operating profitability than conventional aircraft from the mid-2030s.

Through the development of concept aircraft, FlyZero has identified on-board technologies which, along with the infrastructure and ground equipment for refueling, require rapid development to deliver zero carbon flight. These advanced technologies include wings without fuel tanks (dry wings), hydrogen tanks, cryogenic fuel systems, fuel cells and power systems and hydrogen gas turbines.

Projects already funded by ATI and exploring composites as potential solutions include:

In early 2022, detailed results of the FlyZero project will be released, including three final aircraft concepts (regional, narrow-body and mid-size), technology roadmaps, market and economic reports, and an assessment of durability. These findings will help shape the future of global aviation with the intention of preparing the UK to stand at the forefront of sustainable flight in design, manufacture, technology and skills for years to come. future.

“Pioneering research from the Aerospace Technology Institute highlights the potential of hydrogen to achieve zero carbon global connectivity. This revolutionary green technology is expected to play a pivotal role in decarbonizing flights and, thanks to the work of the Jet Zero Council, the UK aviation industry is exploring all avenues to ensure that we protect the benefits of flight for future generations, everything by reducing carbon emissions. cost, ”concludes Emma Gilthorpe, CEO of Jet Zero Council.